​Air-breathing molluscs are limited in the time they can spend under water so live higher up the shore, this tiny creature (13mm) can also take in air via the skin so at rest it rarely uses the external lung opening.  Studies in Bude in the 1970’s indicted though that it was able to live in most tidal zones and utilised the crevices in rocks. Mites and other air breathers do this as some crevices still contain air when the tide returns. It was also found to use empty honeycomb worm tubes. so it is worth hunting everywhere.
It is able to discern light and dark using photoreceptor cells and eyespots, the tentacles also contain chemosensors allowing homing back to a safe location by following a mucus trail.
Like most gastropods it has a flexible sex life, it is a hermaphrodite, containing both sex organs. Fertilisation is internal and often involves multiple animals and this results in eggs (spawn) being secreted onto rocks. It lacks an open water living larvae and this combined with the adult having a homing instinct means the slug does not easily colonise new areas, it is limited by how far it can and wants to crawl. So it has a patchy distribution.  This makes them particularly susceptible to local rock damage by storms and erosion, an entire colony can be wiped out simply by home crevices being damaged and then no new colonisation occurs even if it is a prime location.
They are grazing animals feeding on the biofilm and marine algae. The best time to find them is in summer as they like warm weather to mate and become less active in the winter months, hiding in crevices out of sight. One interesting adaptation is the ability to shed a layer from the outer surface of the slug’s back, this is thought to assist in preventing marine algae from growing on it, it might also have something to do with biological internal functions as the membrane is permeable.
These tiny creatures are clearly home loving, warm weather basking, open lifestyle, hippy social loving organisms. Their distribution is under-recorded as they are so easily missed, perhaps only living on one single rock on a beach. One to search for on those rare warm summer days.
References; On the occurrence, ecology and behaviour of Onchidella celtica (Gastropoda, Onchidiacea) in the littoral of Cornwall – TC Tween. 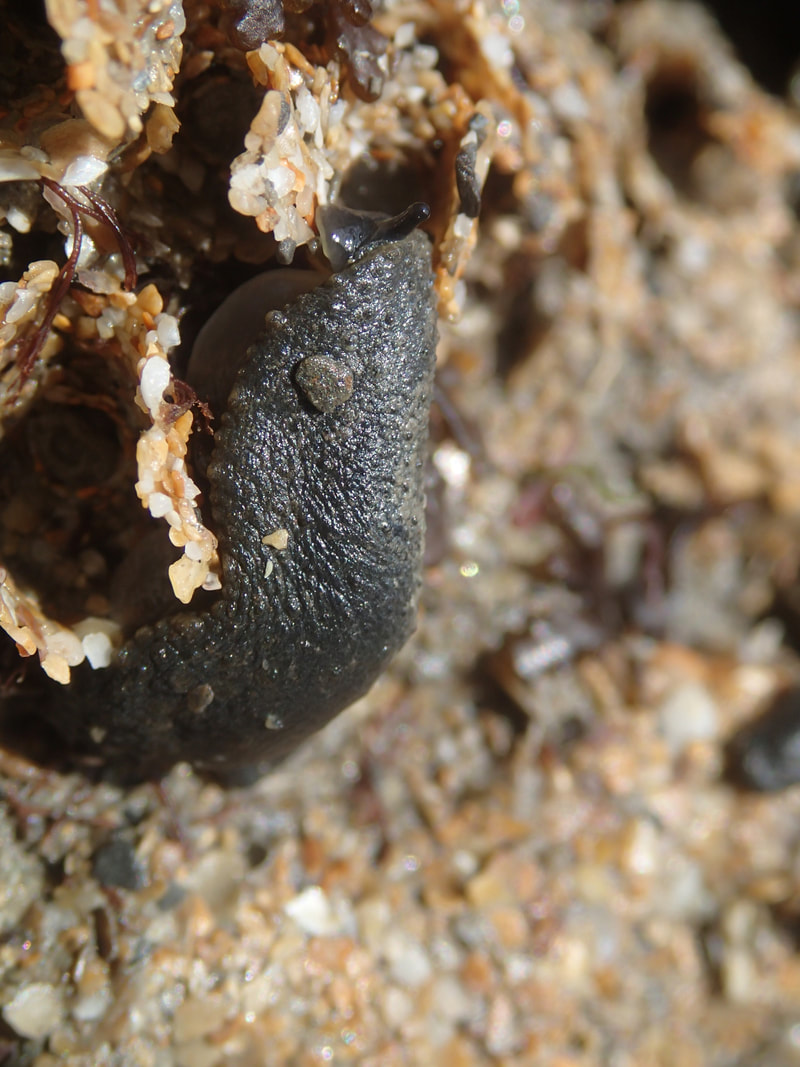