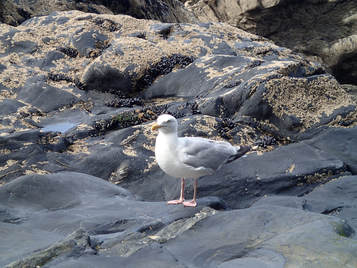 Most of the creatures on the beach are silent, the occasional pop of a limpet as it settles into a homing scar or the plop of a sunbathing blenny as you pass the pool. The birds though bring another dimension entirely.
Herring gulls could never be considered to be subtle, throwing your head back and screaming at the sky won’t win any friends, except they actually are very subtle. Gulls are extremely intelligent and social creatures. They are constantly communicating verbally and visually if you take a bit of time to sit and watch. The image of the vicious gull is simply an opportunist creature exploiting a food source, what we consider unsocial behaviour is anything but.  Gulls have a complex hierarchy system, and they constantly interact with others to maintain this. Throwing your head back is territorial, a demonstration of size and health. Head down mewing is submissive but also bonding, it can be a precursor to head back shouting once the understanding has been made of who is in charge. The subtlety comes from the posturing, lots of side on stances, flicks of the head, very quiet intimate calls, a wealth of communications that we miss as all we see is the gull screaming at something. As a scavenger with limited feeding opportunities it makes sense to establish dominance before the food arrives, that way when it is available less time is wasted fighting and less chance of injury. If others birds arrive who do not know who is boss then the head goes back the bill opens and a fight breaks out, this results in a subservient gull nipping in taking the food and flying away only to be chased by others until it either drops or swallows mid-air. Not all food is tourist dropped chips though, watch them on wet grass and they paddle their feet, worms think it is raining and come to the surface to avoid drowning, a small but protein-rich snack.
The ravens, jackdaws and crows are the characters of the beach, they hunt the pools and sand looking for the dead and dying or the unwary. Equally as noisy as the gulls these are once again social animals facing the same environmental pressures. Communication is essential and against the sound of waves, a big voice is key. The corvids play in the updraught from the cliff, saving a huge amount of energy they skilfully use tiny changes in pressure to soar. The turbulence generated by cliffs can be considerable and yet they seem to understand every single air pocket. Watch a raven and it hardly flicks a wing but moves 50 meters in seconds. Up here in the upwelling wind, the peregrine falcon sits, out of sight and ready to close its wings and dive to incredible speeds on unsuspecting prey such a pigeon.
The coast is a dynamic environment and these big birds make full use of it, mastering the wind. Along with the fulmar, they make it effortless. Lower down the cliff a smaller bird is trilling a song as it parachutes on open wings before closing them and dropping to the rocks in a seemingly suicidal flight. The rock pipet is a small brown job, but full of energy and character. Never shy of humans it also makes its presence noticed by being vocal and is constantly calling. This is a warning to us and a distraction, it is leading us away from a nest or territory by making itself so obvious.
Curlews and oystercatchers constantly call, few birds here seem to be silent, sound is clearly essential. Cormorants and shags, hanging wings out to dry on the rocks due to a lack of oil gland (needed to keep feathers waterproof) seem to be the only quiet ones. Vulture-like they sit watching the tide until feathers dry allowing them to hunt again.
There is no doubt the calls of coastal birds are evocative, the essence of being at the seaside, but when we go there we run around and shout so why shouldn’t they. It would be a very sad place without them, unfortunately, though overfishing and ghost gear is having a devastating impact. Each year thousands of birds wash in tangled in fishing line and netting, cliff-nesting birds starve as food supplies dwindle and the parents have to fly too far to make it viable to raise chicks. The birds are a noisy and visual indicator of the health of our seas and coast as the top of the chain organisms they are highly vulnerable to the problems we create.
​